to giving the Irish a sense of community

Ambassador – you are spoiling us… 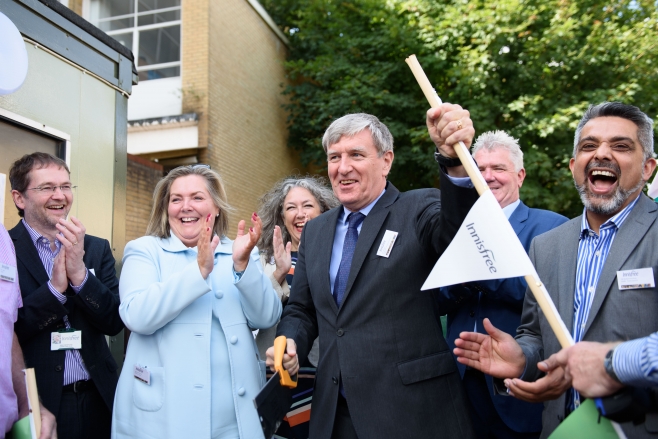 Not many can say that their shed was officially opened by an Ambassador, but that is the case for Innisfree Housing Association’s ‘Men’s Shed’ at one of its sheltered schemes, Clochar Court in Harlesden.

To be fair, this is no ordinary shed.  It builds on a concept for community investment first begun in Australia in the 1990s and targeted at men experiencing mental health issues or having problems with transitioning into retirement.  The Innisfree ‘Men’s Shed’ – which actually provides for men and women – is a large communal space where people can work alongside each other on practical projects such as woodwork, furniture repair and basket weaving.

The spur for this particular approach to community investment, was the results of a census which showed that Irish residents in Brent who were over 65 were more likely to live on their own than any other group.  Experience elsewhere had demonstrated that the ‘Men’s Shed’ approach reduces social isolation and provides an informal support network for what can often be hard to reach groups.

The summer of 2017 saw the Innisfree shed being officially opened by His Excellency, Mr Dan Mulhall, the Ambassador of Ireland to Great Britain in his final engagement before his move to become Irish Ambassador to the United States!

Since then it has gone from strength to strength and is a hive of activity.  Core members – both residents and members – take responsibility for the day to day running of the shed and are experienced in the safe use of the equipment. A creativity enabler has meant that projects ranging from upholstery to the making of troughs, bird houses and feeders have been taken on by the members. 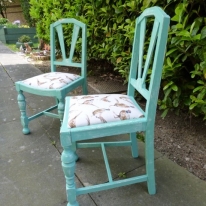 One resident, Neely, took on the job of restoring two chairs that were donated to the project. These chairs were very well crafted in Bulgaria and Neely saw the potential to upcycle them. He sanded them down, applied a primer, undercoat, overcoat and finally a finishing coat. Neely knew an elderly lady who needed a couple of chairs, so he was delighted to be able to provide her with them. He enjoyed the creativity and seeing the finished product gave him a great sense of satisfaction and achievement.

The project continues to evolve and, as is often the case with successful community investment, the “return” is evident for all to see.  Innisfree hopes to quantify the impact of the project in order provide the evidence needed to encourage others to adopt a similar approach in their communities.

The project, initiated by Innisfree, was made possible with the support of O’Donovan Waste Disposal (who provided the shed), Carfreys (who refurbished it), Irish in Britain, and the Department of Foreign Affairs and Trade (Ireland) who have continued to provide revenue funding for the scheme through their Emigrant Support Programme.

Back to all stories

This site uses Akismet to reduce spam. Learn how your comment data is processed.